Play for the distribution your opponents will be playing for

In a team game, I'm sitting South when I am faced with a decision.  Do you agree with my bid here? 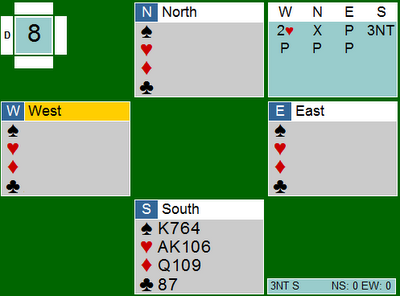 This was my thought process: partner could have doubled under pressure and might have only 3 spades. With two stoppers in hearts, 3NT is both one level lower and probably safer.  I would probably bid it again, although feel free to suggest a different bid!

I got the totally unexpected lead of the Ace of clubs on which East encouraged with the 10 of clubs (Click on "South" to hide other hands and click "Next" to see the first trick).  How do you play this hand?


4S would make (the relevant comparison at teams is what your opponents at the other table are doing) only when spades are 3-2 (1 spade loser, 1 diamond and 1 club).  So that is the distribution I should play for.   Click Next to see how I should have played it. (Unfortunately, I didn't make this inference at the table. Instead, I went down 1 trying to cater to a 4-1 spade split.)

I don't typically play robot tournaments on BBO because:

(1)  "best hand for South" is too artificial for me
(2) Having a robot for a partner somehow makes my play less serious -- there is no one to let down!

But I did play a robot tourney yesterday, finishing barely in the money with 54% and both these aspects were on full display, ironically on the best and worst hands of the set.

My best result (worth 81%) was when I passed out a 13 point hand in fourth seat.  Totally artificial.

The worst hand of the set was this one where I forgot that LHO had bid clubs.  Partner happily put me in 4S which got doubled and went down 3.  4H, of course, should go down.  Surprisingly, -500 was worth 38% because some five players defended in such a way that 4H made. 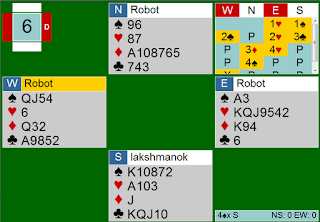 Forgetting what the opponents bid never happens when I have a human partner -- this is strictly behavior that happens when playing with a robot!

Sunday Swiss at the OKC regional.  We're playing in the 0-2000 section and have won the first three matches and are now playing the eventual winners.

First board of the match, they bid 1NT and go down 3 (vulnerable!).

Second board of the match, they bid 3H and go down 3.

Third board of the match, they bid 2S. I have 18 high-card points and 4 spades. I do what any idiot would do under these circumstances. I double. They make 10 tricks, get 13 imps on the board and win the match by 11 imps.My partner and teammates were surprisingly even-keeled about the whole thing.

Their even keel helped; we won the last two matches, came in fourth overall and picked up 5 gold points.

Still ... it was a spectacular lesson in why you should not double part-scores at imps.

The second session of the 0-750 Gold Pairs was not the cake walk that the first session was.  It had nothing to do with what partner or I did ... it was just that the opponents were bidding their contracts and taking their tricks. With one round to go, we were in fourth place with 51%.  The last two boards were near-tops, taking us to 56% which was just about enough to win.  The session win, and the overall top, was good was 6 gold points.

The last-but-one board was a nicely bid club slam by partner: 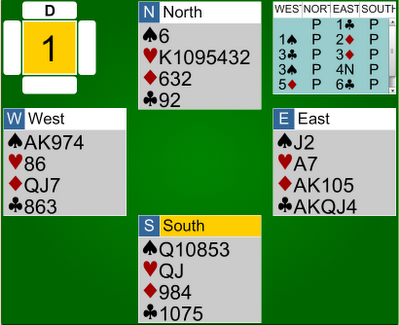 The 3D and 3S are control-bids and 4NT is RKC for clubs. 6NT makes here, but is hard to bid since at 6C at least, it could be possible to establish my 5-card spade suit by ruffing:

What do you bid?

Would you have thought that this board would produce a match-point top?

Me? I passed and led a spade. This was the full hand (click Next to see the play):


Declarer was down 2 for 200 points. Top board for us. Most of the field, holding my hand, had over-called 2S.  I held neither a 6-card suit nor a two-suited hand, so I passed.  One of my rare attempts at discipline ...

Some athletes live permanently at high altitudes so that the extra red blood cells give them a competitive edge when competing at near-sea-level events. That's how partner and I felt when playing at the 0-750 gold pairs 2-session event at the OKC regional.  At our club game, the average masterpoint holding is about 1500 and all six regular pairs are quite strong. The regional pairs event was a comparatively easier field.

In the first session, we had a 68% game.  If it wasn't for this board, we'd have broken 70% and probably got our names in the bulletin.  Third hand, north opens 1D and my partner had a decision to make.  What would you bid? 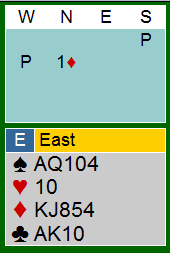 My partner selected 1S.  As it turns out, 1NT might have worked out better.  I showed a limit raise with 2D (see below). He had, of course, over-called a 4-card suit but was afraid of hearts at NT.  So, he bid 3D. I wasn't sure what that meant, so I simply corrected to 3S and we played in 4S.  Partner made it, but the field was in 3NT making 10 tricks.  4S was worth only 2 out of 11 match-points. 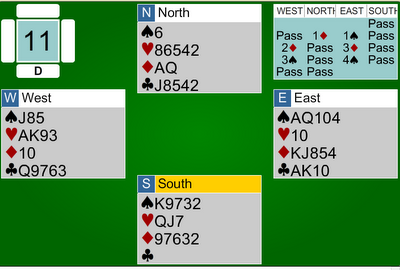 Yes, she really opened 1D with that hand.  It was alerted as "could be short".

A hand from an evening pairs game at the OKC regional that I wish I could have a do-over:

Sitting West, you pass. Lefty preempts 3D, partner doubles and now it is back to you.  What do you bid?

I jumped to 4H, but this was partner's hand (see below). When you bid badly, you better play well and I managed to go down only one in the 4-2 heart fit. Still, I bid badly. What should I have done?

I should have realized that partner was bidding under pressure and might not have the perfect takeout double. I, on the other hand, can tolerate all the other suits. 3H would be what I would bid with a zero-point hand, so that is out. The better bid is 4D, which is forcing to game and asks him to bid his best suit. Even if he bids 4S, we will probably have a good shot, since if spades are his best suit, they rate to be quite good.

At the Oklahoma City regional, partner and I had a horrible, horrible game (49%) but still managed to pick up 1.6 masterpoints.  "It's nice to have a bad game," partner remarked, "and get masterpoints as consolation".

It seemed that every high-variance play rebounded to the opponents' favor. Take this board, for example. The bidding starts out 1NT by North. South uses Stayman, North denies a 4-card major and we end up in 3NT played by North. If you are sitting East, what do you lead against 3NT on this contract? 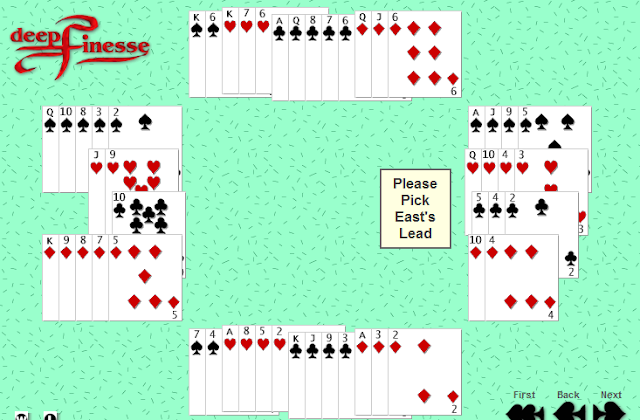 We got the 10-diamond lead (Deep Finesse tells me that's the only lead that will beat the contract) and went down. Most of the field, I imagine, got a major suit lead, making.

And so it went all night. At least we got some MPs out of the fiasco.

Playing in a surprisingly large club game yesterday, partner and I had a 58% game which was good only for second place. Either of these boards where we got a bottom would have made the difference. Looking at the boards, it seems that we made the right decisions, i.e., decisions that are with the odds. But the cards were such that a worse decision, made by most of the field, carried the day.

Here's the first.  I'm South, in 3NT and receive a heart lead: 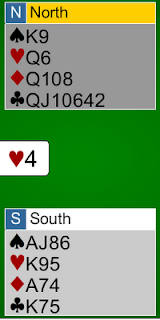 What do you play from dummy?  If you reflexively play low, congratulations. You were with the field and you make an over trick.   But think about it for a second.  The only case for playing low is that you hope that West has both the Jack and the 10 of hearts. Otherwise, East will insert his Jack or 10, drive out your heart stopper (ducking once if necessary) and then when they are in with the ace of clubs, they'll cash their hearts.  Down 1. The best play is to go up with the queen. This wins whenever either East or West has both missing aces. If East has both missing aces, you can destroy communication between the hands by holding up the king till the third round. If West has both missing aces, your king is guarded and the contract is safe. That both aces are with the same person is a 50% chance. That East has neither jack nor 10 is a decidedly lower number. But the bridge gods were against us. This was the full deal: 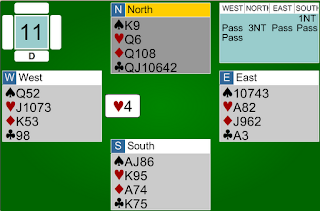 This is pretty much the only configuration of cards where playing low from dummy wins.  Ugh.

Here's a second.  I was South again and having opened light, I found myself in a tough spot after partner doubled their 3H contract. His double shows a good hand that is long in clubs, short in hearts and willing to play in a diamond contract or for me to pass it for penalty. Unfortunately, I am also short in hearts and my diamonds are quite bad.  My club king, though, is promising. The 3NT contract has play if the clubs are split 3-2 and if the clubs are 3-2, their 3H is down only 1.  We needed to bid our vulnerable game and so we did. But the field didn't. The clubs were 4-1 and so the poor decision won out. Ugh. 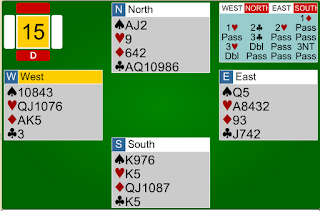 Oh well, tomorrow is another day. Regression to the mean. All that stuff. Keeps bridge interesting.