It is match-points and I was playing against three robots.  The bidding went:

Dummy comes down with 4 hearts and a diamond void. Plan the play on the lead of the 4 of diamonds.


Yes, I over-called my chunky 4-card suit; wouldn't you? Anyway, assume you did and partner raised to the "law" level. How do you play this?

It is a little hard to count tricks in this situation. With the lead, I have two top tricks: Ace of spades and king of diamonds. And three hearts if I give up the queen. That is 5 tricks. Where are four more tricks? One way is to use all 4 of dummy's trumps to ruff.  In order to enter back to my hand, though, I have to give up a club. And the opponents will lead trump at that point. So, it is only 3 dummy ruffs, 3 hand ruffs and two top tricks. Only 8 tricks. What am I missing?

What I was missing was that the opponents had not led trump yet. I needed to plan the hand assuming that the defense will not find a trump switch. The defense thinks I have five trumps and so, I need to act like a guy who has a spade honor and is missing heart honors.  If I had Q10 of spades and only AJTxx of hearts, I would be throwing a club, so that is what I need to throw from the dummy.

The second thing that I was missing was that even if the opponents led a trump, I may need only 3 ruffs in dummy if I can finesse the queen of trumps.  So, 3H has a a couple of chances. I need to maximize both.

One advantage of playing robot tournaments is that I can look over the other boards and see what would have happened if I had thrown a club on the first trick. Then, East cashes his King of clubs (to show where his entry lies) and leads a diamond, hoping his partner has a singleton heart honor and can ruff in front of dummy.  Instead, if one throws away a spade (as I did), East simply continues diamonds (go figure) and then once a club is led, they find the trump switch. At that point, if I take the finesse, I scamper home with 9 tricks (if the finesse loses, I get only 7 tricks: which is why throwing a club on the first trick is so important).

p.s. The double-dummy line to make 3H without resorting to subterfuge is very interesting. Essentially, it involves ruffing the first trick (!), cutting defender's communications in diamonds and then finessing the spades. Highly unlikely that I would find it at the table!
Posted by Lak at Tuesday, March 19, 2013 No comments:

In an effort to improve my declarer play, I have been using the bridge software wbridge5.  I can play at a table with 3 robots, and if the robots are set at the maximum level, they bid, play and defend quite well. As far as I can tell, wbridge5 is a little better than BBO's advanced GIB robots in terms of bidding and signalling. Also, the deals are more realistic in that one can not make decisions based on having been dealt the most high-card points. Plus, it saves me 2.5c a hand ...

Having bid and played out the hand, I can ask the software to tell me the par on the deal. The report includes how many tricks one can make in all 20 possible trump-declarer combinations. These are, of course, double-dummy and it is not possible to expect to get to par always, but it is a pretty good way to gauge one's play of the hand both as declarer and as defender. (The human plays the hand for the robot if the robot partner ends up declaring).

The contract is 2H by North.  East leads the 7 of diamonds. West takes his Ace of diamonds and leads a trump. How many tricks can  you take?

My plan was to reverse dummy and to ruff twice in hand.  Two top tricks in clubs, ruff a club, ruff a diamond and four tricks in hearts (assuming hearts break 3-2) makes 8 tricks. Making 2H is, however, not par. You need to make 9 tricks. Can you see it?

The best line, believe it or not, is to establish the spades and forget about ruffing a diamond (click Next to see the play):


Is this simply a double-dummy line or is it something that you would think of doing at the table? It seems unsafe, since if spades are 4-2 and the hand with 3 hearts gets in, they can hold me to 7 tricks.

A failure of imagination

Playing online, everyone non-vulnerable, I pick up this nice hand.  Playing 2/1, what do you open?

I decide to open 1S. If partner can't scrape up a bid, 1S may be enough. Partner replies 2S (the opponents are silent throughout).  Now what?

If partner has his points in diamonds and not in hearts, we may have a slam. What do I need from him for the slam to be cold?  Kxxx xxxx KQx xx would do.  So, I decide to bid 3D, a help-suit game try.  Partner should reply either 3S or 4S and then I can decide.

Partner replies neither 3S nor 4S. Instead, he bids 4D.  The bids so far:

Now what do you bid?

Can you envision a grand slam because that is what you make? This is what partner has: 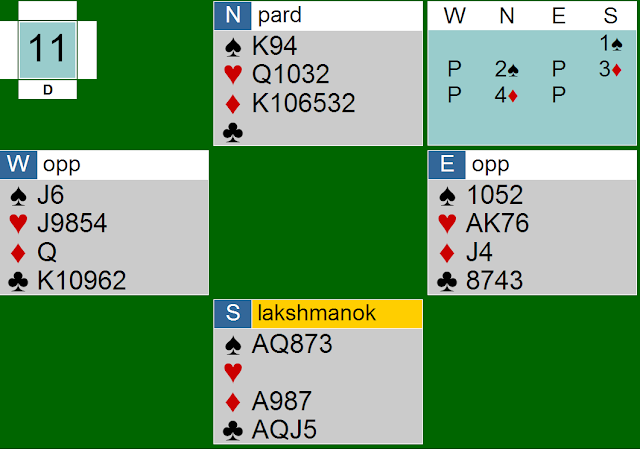 At the table, I convinced myself that if partner had KJxx of diamonds, he was unlikely to also hold the King spade and the King of clubs.  So, the slam would be on two finesses (diamond queen & spade king, for example). I chickened out in 4S.

Partner's 4D was a very descriptive bid, but I had had a failure of imagination.