Pulling in our horns

Maybe because we primarily play match-points, my regular partner and I are much better at bidding games and part-scores than at bidding slams. Playing in a team-game, though, that is a liability -- it's not just one bad board; it is often the whole match.  Both partner and I underbid our hands to miss a cold grand-slam on this deal: 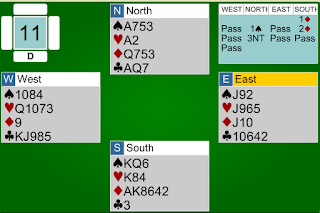 Taken individually, the decisions make sense.  Does South have enough to jump to 3D on his second turn? What can North bid that would be game forcing and still explore slam?  Having underbid on the first turn (I was South, and 2D is what I'd have bid with a poor 12-point hand), I could have bid 4NT, inviting to 6NT ...

The opponents bid 6D and that was enough for them to win the match since the other boards were all pretty even. We later won two other matches, so the event wasn't a complete bust, but at IMPs, we need to be able to find our slams.

But talking about missed slams, here was another. Luckily, in this case, the opponents did not find the slam either, so the board ended up being a push (here too, I was South): 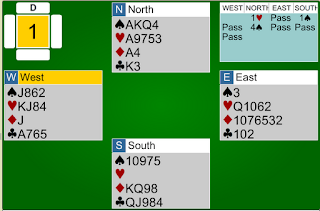 I'm in NYC, away from home, on (cue the shock music) Valentine's day.  The wife and I went out for dinner on Friday, well before the madding crowds, but it still feels bad to be away on the designated lovey-dovey day.  Especially since the daughter insisted on wishing me thrice --once yesterday (before I left), the next this morning over the phone and again in the evening.  Girls!

For dinner, therefore, I decided to go for Pathos.  I found a restaurant serving Ramen noodles and what can be more pathetic than eating a bowl of Ramen, all alone in a strange city, right? Only, this is New York. The ramen noodles turned out to be delicious -- there is no way the bowl of soup I had tonight has any relationship with that thing you get in plastic packets or styrofoam cartons.

Another problem with ramen noodles is that it tends to get over quickly -- no big production involved for the dish, even in a sit-down restaurant. Since dinner had finished early, I decided to go to the Manhattan bridge club. I went to the bridge club in London when I was there last year and had a grand time -- it's so nice to go to a strange city and find companionship among a group of fellow addicts! The owner of the NYC club had told me to come, promising that it would be unlikely that I would not find a partner. Only, this being Valentine's day, there were not many people. "Not many people" at the Manhattan bridge club turns out to be one pair short of 8 tables. (For comparison, we average 3 tables at our Norman club game).

"If no one comes, I will play with you," said Bill, the director of the game, "but if another pair shows up, then we'll have eight full tables and I will give you a free entry for your next time." "But ... but," I wailed, "can't you have a sit-out?".  Turns out the NYC clubs don't believe in sit-outs because New Yorkers don't like to wait 20 minutes for their next set of hands!

Luckily, no one else showed up and Bill and I played.  He is an excellent player (with 30 times my matchpoints), so my job was mostly to stay out of his way.  We ended up with a 62% game, good enough to win in both directions.  Later, looking at the hand records, I see that even our "bad" boards were quite good -- we held the opponents to the tricks they were entitled to -- it was the other pairs that goofed.

But this is a blog about mishaps, so here is a disaster that could have been avoided (I was South): 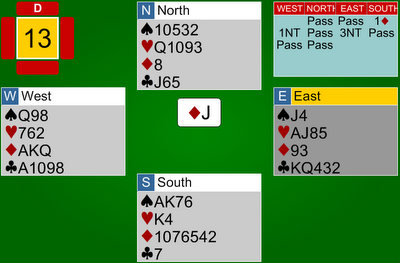 The mistake here was my decision to open the hand -- after my bid, partner led diamonds and free of pressure, declarer happily took ten tricks. At the other tables, where the person in my seat didn't open, hearts were led and declarer usually misplayed spades out of his hand for only 9 tricks.

Or maybe the mishap was having fun on Valentine's day away from home ... I may be paying for this in spades ...

Punish the opponents for bidding

Someone remarked that one in a while I should post a hand that I played well, just so regular readers of the blog don't think I'm a total bozo.

So, here goes. I was playing with a pickup partner and of the 16 times that this hand was played, I was the only one to make 9 tricks in NT, and one of only two to bid game.  See if you can make 3NT (all the bids are natural except for my negative double) -- click on "lakshmanok" to hide the other hands and click "Next" to see the opening lead:

With 9 points, a jump to 3NT seems a tad rash, doesn't it? But when the opponents both bid, you can pretty much place all the cards, and play essentially double-dummy.  Here, the key thing is that the 2D is natural, not a cue-bid. And that pretty much gives me a count of all four hands -- north should have 1 spade at-most and 5 diamonds and the hearts and clubs are probably split 3-3 and 4-4.

So, the lead of the Jack diamond ran around to my queen and I can see a nice tenace against north's diamonds.  I led a diamond and north covered with the 10. What do you do? I ducked, preserving the tenace against the king and a stopper against North's diamonds.  North probably does best here to continue diamonds, but he erred by playing the king of spades and compounded the error by leading a club, right to my queen. I finessed diamonds to reach dummy and led the 9 of spades, covered by south with the jack and taken with the queen.   Heart to dummy and lead back towards my spade honor and I had my 9 tricks.

The biggest mistake on this hand was North's.  He should have fought down his urge to get into the auction with a misfit hand. And he should have stuck to leading diamonds -- his club lead was what got me trick #9. But that misdefense didn't cost since even in that case, I have enough spots in hearts to get three tricks in the suit and I have enough of a count of the hand that I will duck any spade lead from south. North's real mistake was showing me his hand by bidding too much.

Back to the basics

Just when I thought I was getting better, I start making elementary mistakes.

On this hand, for example, I lost count of a critical side-suit: (click on lakshmanok to hide the other hands and click Next if you want to see my terrible line of play).

After the lead of an interdeterminate club (it's not clear whether it's a doubleton or an interior sequence), there are several ways to make the contract with an overtrick. The simplest is to do as I did, but to realize on the first round of diamonds that they are split no worse than 3-1 and shorten east's trumps by making him ruff. Then, he's end played into leading into dummy's hearts.  At the table, however, I forgot that dummy had 4 diamonds to start, and proceeded to go 3 down!

At the club yesterday, I mis-signaled on trick 1 on this hand (click on South to hide the other hands and click Next to see the play):

Partner and I have the agreement that on the of the King, one encourages only if one holds either the Ace or the Jack (not with a doubleton).  I realized almost as soon as my deuce hit the table, but heaved a sigh of relief when declarer took the trick with her Ace. A Bath coup had been avoided, but sure enough, in the middle of the play, partner made what he thought was a safe lead -- low to my "marked" Jack. I didn't have the card I'd promised and this let the contract make.