Playing online, I bid to a diamond slam and played it for down 2. Click on my name to hide the other hands and click "Next" to see my line.  Can you find the cringe-worthy moment?


Did you spot the misplay?

It was trick 6.  I need to come to hand with the 10 of diamonds, ruff the 4th spade, unblock the hearts, come back to hand with a club ruff, pull trumps (hoping they are 2-2 at this point) and claim.

Yesterday at the local club game, partner and I racked up what was our personal best -- a 74% game. There are (of course) a few caveats.  First of all, this was a 3.5 table game, which is typical of the club game in Norman, Oklahoma. Secondly, all but two of the strong players (i.e. 3/4 of the room) were playing with non-regular partners for one reason or the other. So, it was essentially a high-variability game and we swung high.

Only two boards (of the 24 we played) were below average.  Both of those were good bidding by the opponents -- in one, they bid on to 4C, down 1 when we had 3H our way. In the other, they bid and made a diamond slam that was not bid at the other tables.

So, since there was no mishap to showcase, here are a couple of boards we did well on:

(1) On this hand, the other pairs were in 4H, making 4 or 5. I was in 3NT making 5, for a top. The 1C was precision, showing 16+ and the rest of the auction is pretty natural. The key thing was my 3D bid which was notionally 4th suit forcing.  I wanted to hear what partner would bid: if he made a delayed raise of hearts, he'd be showing a doubleton and I'd raise to four. However, if he rebid spades, I'd take a chance on 3NT.  If he bid 3NT? I'd have a problem there -- maybe I can bid 4D to explore a diamond slam?

(2) This was another good board where the other tables either did not preempt or did not find the defense to 4H (encourage under Ace of clubs, overtake second club from partner, return a spade and score your tiny heart):
After the hand, partner remarked that he'd probably have found the spade switch even if I hadn't overtaken the club, but why not make it easier on partner?

How thin is the game/slam?

Playing teams yesterday, we came in a close third. These are the two boards that got us and they both hinged on evaluating my hand on its suitability for somewhat thin games and slams.

As South, I opened 4H on this hand and played there (we open rather light, so partner's pass limited his hand to 9 points):
The opponents at the other table bid a heart slam, and brought the contract home when West turned out to have KQ tight in spades.  Even if you are supposed to bid thin games and slams at teams, I think that this is a tad too thin.

Another board was also hand evaluation gone awry:

Partner opens 1C (Precision: 16+ points) and East comes in with 1D.  Now, I have to decide what my hand is worth. I have 9 high-card points if I count the Jack of spades. I decided to double, showing 5-8 points and a balanced hand.  Partner bids 1H which, in our Canape-style bidding, could be just 4.  Do I stick with my original hand-evaluation or has the hand gotten better?  There is a strong case for bidding 4H now, but I went the low road, bidding 2H which partner passed.  As you can see, we can make game when either the club or the heart finesse are on.  So, this was a game that ought to have been bid, even at match-points.  The opponents, playing 2/1, opened 1NT, did Stayman and landed up in 4H, making.

I ended up going to New York City on work last week and since I'd had such a good time around Valentine's, I decided to see if I could repeat the experience at the Manhattan bridge club. Bill, very graciously, agreed to play with me again and we played East-West in a 12-table game.

Unfortunately, I didn't play all that well, committing a number of rookie errors on defense. These were the two most egregious, in that they converted what would have been a cold top for a bottom. If I'd gotten either of these defenses right, we'd have been in contention to win. As it was, we finished with a 52% game for fourth place.

First, this hand where as East, I held

AJ10986.  South bid 1S after two passes and I overcalled 2C.  North raised to 2S, West competed to 3C and the opponents bid 3S which Bill promptly doubled.  What do you lead (and why?)

I made the only lead -- the Ace of diamonds (hoping to score one of my spades with a diamond ruff) -- that lets them make with no sweat.  This is the full hand:

Rookie error #1: A simple passive defense where I don't cash or underlead either Ace is best once partner has said he holds defensive strength.

Another of the hands-that-made-a-difference was this one.  Against 3NT, partner leads the 2 of hearts (fourth highest).  You hold:

976 and you are ready to play the King of hearts over dummy's Queen. But declarer calls for a low heart.  What do you play (and play smoothly)?

I erred, playing the 9.  If declarer had the Ace, he would have called for the queen. Ergo, he must have the 10. More to the point, I have a stinking doubleton. I need to unblock the king of hearts.  Beating 3NT would have been a top. Letting it make with an overtrick was a bottom.  This was the full hand:


Rookie Error #2:  I could have taken my time since it was, after all, the first trick where everyone takes their time whether or not their king is finessable.
Posted by Lak at Sunday, April 08, 2012 2 comments:

If you forget option 3, does it mean your system is too complicated?

Partner and I play "multi-Landy" as our defense against NT. It is targeted towards competing only we have a two-suited hand:


So, what should I bid with this hand after East opens 1NT? 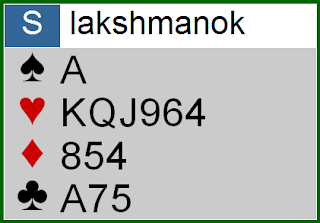 Easy! 2D, right? Except that this bid is so rare that I plumb forgot about it.  We missed a cold heart game because this was the deal: 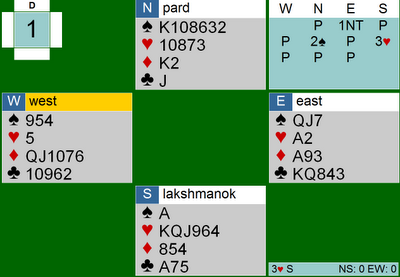 Either this is an indication that I should remember our systems better or that we should simplify them.

p.s. Of course, we still may not have found it.  West might double 2D and East might bid 3D. At which point, 3H will still be merely competitive whereas 4H would be a shot in the dark.