One howler and one close call

Playing in the GNT qualifiers at the club yesterday, we'd won our first three matches and were playing the fourth, and final, match for all the marbles. I made two bad decisions in that last match.

The first mistake was a howler.  Lefty opened 2H, preemptive and partner, in fourth hand, bid 4S. It was passed around to righty who doubled. Back around to me. I was void in spades and 4-4 in the minors with a decent hand. I should have left it in, of course (4S goes down 1, perhaps) but I scrambled with disastrous results.  Lesson learned -- a 7-0 fit is easier to play than a 4-3 one especially if the 4-3 contract is one level higher.

The second mistake, a closer call (I think), was on this hand.   I was sitting South, and my 2H overcall shows hearts and a minor.  The opponents end up in 3NT. 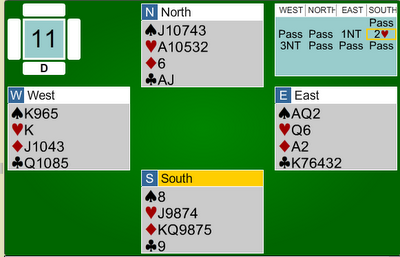 Against 3NT, what do you lead?

I reasoned that West probably had the hearts stopped, what with my hearts being so bad.  And my diamonds were longer anyway. So, I led a diamond. Disaster ensued as declarer now had his nine tricks.  (Our team-mates were in a club partial, making.) Do you have any way to deal with this?  Does North have anyway of suggesting a heart lead?

These two hands cost so much -- 22 imps! -- that two of the teams we beat earlier pipped us, and we ended up fourth.  Being a C-team, however, has its advantages -- we still qualified.  It would have been better, of course, to have made it honestly instead of relying on the handicap.

Against a contract of 3H, partner leads the 7 of hearts and you win with the Ace. Plan the defense:

At the table, I woodenly returned a heart and 3H could not be beaten.  Can you do better?

Think about it.  Partner's lead, and his spade bid tells you that partner probably has 4 spades and 3 hearts.  So, declarer must have 2 spades and 4 hearts.  Partner probably has the Ace of spades (he didn't lead it) and declarer can make this inference too. Thus, declarer has only one loser in spades.  Partner can not have both KQ of diamonds (he didn't lead them) and so his diamond honor is finessable. It might even drop doubleton. Where are partner's points then? He must have a club honor. Unless you switch to a club now, declarer makes his contract, losing one spade, one heart and only two clubs (discards a club on the fourth diamond).  This was the full hand: 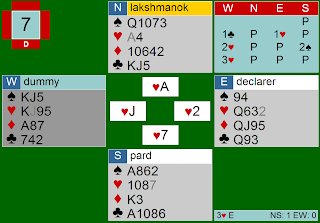 Keep them out of slam

At the club yesterday, we had a solid game (54%), but not enough to scratch.

Here was one of the problem hands where I was West. Because the club hasn't uploaded the hand results yet, I can't see what happened at other tables.  From my point of view, everything looks so ... routine.  Why would 6H making 6 on this hand be a zero? 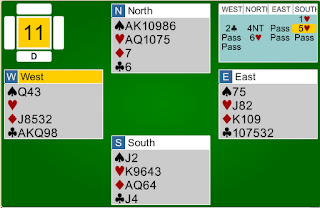 What am I missing?  Should I have bid 4NT over 1H to show the two-suited minors? That might have made it harder for them to find their cold slam.  Sacrificed in 7C?
Posted by Lak at Saturday, January 21, 2012 5 comments:

Being lucky is not good for blogging purposes

There have been no blog-worthy hands the past few days. One of the upsides of making a flagrant error at the bridge table is that I at least get to write about it on this blog. But this week, none of my mistakes costed much.  We ended up with 60% games (and one 75% one) every time we played, and that was not because we were playing all that well.  We were just plain lucky, which is not good for blogging purposes.

Consider this hand from an online matchpoint tourney (click on lakshmanok to hide the other hands).  Partner bids 1NT. What do you bid holding 4-5 in the majors and 4 high-card points?  I saw two options: Garbage stayman (bid 2C and pass partner's response since bidding 2H over his 2D should promise a better hand than this) or a simple transfer to hearts.  I chose to transfer:

South decided to get in on the action with a takeout double (vulnerable, holding a balanced hand, with a strong 1NT sitting over him!) and North bid 2S. I know partner has at least 2 spades, and so, they are about to play their 4-3 fit.  I double.  North then runs to 3D.

Now my errors began. I should double 3D also, of course, but I thought we were in a forcing pass situation (for what? partner can have no bid). In the defensive card play, I made another error (click Next on the above hand to see if you can spot it).

Neither error -- the failure to double or cashing the king of hearts -- cost us. Declarer ruffed dummy's winning Ace of clubs with the Ace of diamonds, negating my heart suit mistake.  3D down 2 for 200 points was itself a match-point top.

I make two mistakes, and still get a top board. That's how my week has gone, bridge-wise.

What's the lifeline of bridge again?

West bids 1NT (14-16) and partner doubles. We play Multi-Landy and this shows an equal or better hand. East passes and I need to make a decision.  I squeak out a 2H bid because I can not leave the double in when the opponents probably have 23 points and a runnable club suit.  Partner goes into the tank a bit and emerges with a 4H bid which is passed out.

You get the lead of 7 diamond and this is the hand that comes down as dummy. How do you rate your chances? How do you play? 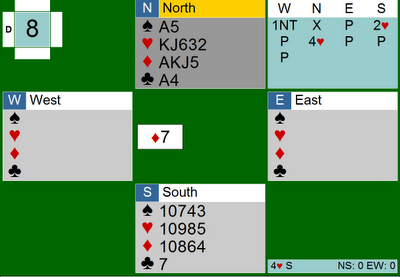 You need two entries into your hand to lead towards the hearts. The club ruff is one entry. The 10 of diamonds is your only other reasonable shot at an entry since the 7 is probably from a doubleton holding. If you played anything other than the Jack of diamonds at trick one, you will be down 1.

This is the full hand (Click Next to see the play):


Needless to say, I didn't put the Jack up on trick one. Jeff Lehman would love this hand.

Playing online with pickup partners, nearly all of our bad boards were the result of poor decisions.

Here is one of them (it's IMPS scoring). Do you agree with my bidding? 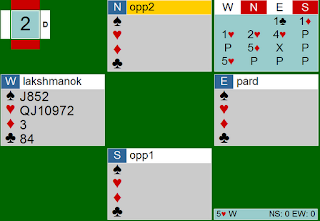 Of course you don't agree with my bidding. I only post my mishaps. Which of my bids -- the initial bid of 1H or the pull of partner's double -- do you not agree with?

This was the full hand: 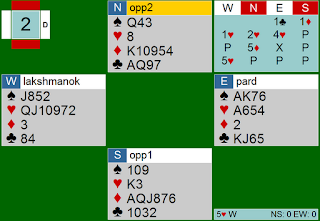 5H was down 1 -- losing only the two aces and the king of hearts, since I was able to end-play south. As for the bidding, my pull of the double was correct. My hand is worth nothing on defense (swap the opponents' clubs and hearts and 5D makes) whereas the cue-bid makes it likely that we have a double fit in the majors.  The wrong bid, I think, was 1H. I should have bid 2H, a weak-jump-overcall that would have described my distribution and strength much better. Now, if partner doubles, I can pass without any misgivings.

Here was another poor decision (this one is matchpoints). Find the wrong bid: 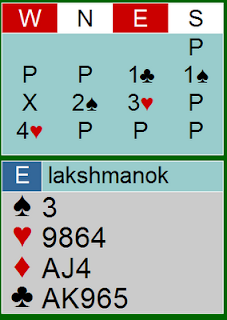 This was the full hand: 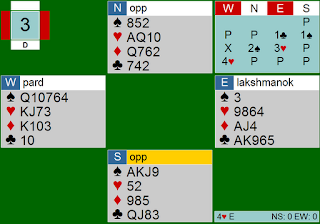 Sure, partner's bids did not exactly exhibit good judgment, but the really bad decision on this hand was mine. It was the decision to open in fourth seat with such poor holdings in the majors. I should have just passed this hand out.

When a defender leads you down the garden path ...

Playing in a club game against an expert defender, we are in 4H. I get the lead of the 9 of diamonds (top of nothing) and dummy hits with 7 diamonds.  I play the queen to the Ace of diamonds and get a low diamond lead back.  How do you play?  (Click on "South" to hide the other hands. Then, click on Next to see the opening lead and dummy.).

At the table, I discarded a low club and when west played low, I saw that dummy's diamonds had been established.  I led a heart to my King of hearts and played the queen of hearts to discover the bad news.  Now, west had a trump and I had at most one discard on the diamond.  I finessed the spades, but it lost and soon I found myself down 2.

Did you also get led down the garden path, or did you find the line to make?  I think it goes to the reality distortion field that a good defender can create that I didn't see the line to make the contract until I drove all the way home from the game.

If you keep clicking Next on the above diagram, you'll see how to make it.  It involves realizing a couple of things. First, the low diamond return is a dead give-away that east has the Ace of clubs. With two aces, he can hardly have the king of spades also. He is not worried about setting up diamonds, so his partner probably has 4 trumps and if so, the right line is to forget the fully set up diamonds (the diamond suit is the garden path he's leading you toward) and take a ruffing finesse.