My opponent on one of the hands I played at the club game on Tuesday emailed:

Great to play against you last night, including board 25 where you opened
1 NT on void, Ax, Axxxx, AKJxxx and wound up in 5D. It's so great that you
have children, because otherwise society would have to put you in some
sort of captive breeding program in order to preserve the genetic
diversity that you bring to the world.  There simply aren't that many
humans who would bid the hand that way!


This is the hand that got him so snarky: 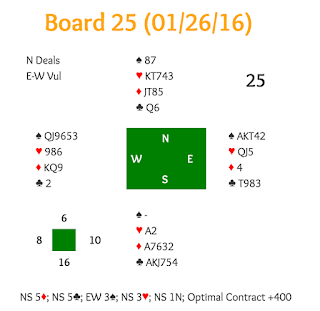 Partner (N) passed as did East.  Having sorted the South hand as follows:
I opened the hand 1NT (15-17).   West overcalled 2S and partner passed.  East, with remarkable restraint, passed!   At this point, I looked down at my hand and realized that I actually held:

The rest of the bidding went:

Seems quite normal to me.

Partner and I had a nice 57% game last night, good enough for second at the club and almost good enough to break the top-25 nationwide in the Common Game.  This was one of the hands that I wish I could take back. 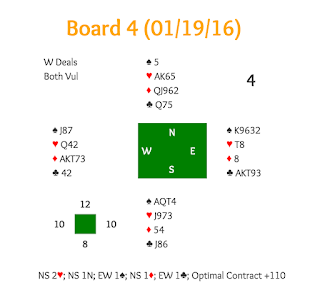 Here are some options:


I fell from grace. Reasoning that my diamonds were likely to be worthless in a suit contract (they'd be ruffed by South), I decided to bid 1NT.  This was disastrous because North bid 2H over the 1NT, partner bid 3C reasoning that I must have minors and we ended up in 3S doubled and down 2.

For a nationwide bottom.
Posted by Lak at Wednesday, January 20, 2016 No comments:

Playing in a 25c matchpoints tournament on BBO, I picked up:

What would you open?  17 points, two aces and the spade suit. I decided to upgrade this to a 18-count, and open it 1S planning to rebid 2NT. Partner surprised me by bidding Jacoby 2NT and we landed up in the no-chance slam: 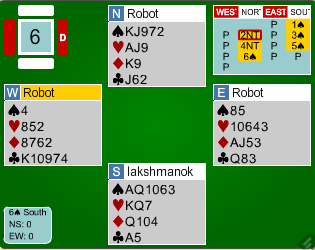 Two hands later, I was third hand and held:

Partner opened 1S.  What would you do? I decided to mastermind a little, knowing that in robot tournaments I would hold the best hand. So, knowing that partner had opened a 11-count, I passed!  Unfortunately, this was the full deal: 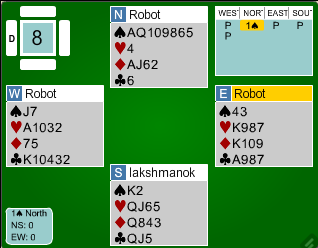 I averted total disaster by making 5 when I took a diamond finesse and East decided to cash the Ace of clubs and led a second club.

I should have masterminded a little more. Knowing that 1NT is 100% forcing, I should have bid it and passed partner's response. If the robot opened a 11-point hand, it would have been shapely and even a 2C response would shown real clubs.

Looking at the other tables, though, it appears that North rebids 2S (not 3S as I initially thought) and the Souths find ways to raise to 4S on that motley collection! What did those people know that I didn't?
Posted by Lak at Saturday, January 09, 2016 No comments: