Signals do not replace bridge logic

The auction has gone:

And they are playing 4H doubled.  I held:


Under my Ace of clubs lead, partner plays the Jack of clubs.  We play upside-down signals, attitude to first trick.  The Jack is, therefore, discouraging but partner might also play the Jack to deny a touching honor.  Plan the defense.

First of all, it appears that my 3H limit bid gave West a cheap entry into the auction. Bidding 3S would have put him under pressure. But that is water under the bridge. Can we beat 4H doubled?

At the table, I failed to see past "Jack of clubs is discouraging." In retrospect, I should have applied some bridge logic because partner's signal has completely clarified the position.  If partner has Jack-third and is discouraging, then declarer has the queen of clubs and since dummy has the 10, I lose nothing by cashing the second club. Also, with dummy's spade holding, it appears that we are not getting a spade trick. Where are partner's 11 or so opening points? The only way to beat this is for partner to have the AK of diamonds or a doubleton club.  If partner has 3 clubs, 5 spades and 2-3 hearts, then declarer must have 3-4 diamonds, so partner's diamond tricks are not going anywhere. I should play the two top clubs, and lead a club for a ruff. If partner has the Ace of diamonds or the KJ of diamonds, he will ultimately come to one more trick.

The law of total tricks is not really a law

Playing Precision and rather weak openings, I pick up this hand as dealer (red against white):

I am rather proud of myself, because I passed. I didn't talk myself into opening the balanced 10 point hand.

Well, we do have 10 trumps. But on the other hand, I have a balanced hand. I decided to be disciplined (I still can't believe it!) and bid only 2D.  We play the cuebid as a limit raise of spades.  Partner bid 2S and I passed.


"My good decision of the day," I joked to my partner, when he made 3S.  "Well don't stop now," he replied. My optimism about this board was well placed -- 2S making 3 was worth almost all of the match-points since the field was in 4S. One pair of defenders forgot to cash their heart tricks, so we didn't get a cold top.

I decided to overcall 1S.  This is probably not the best decision, since I don't really want spades led. But the vulnerability is favorable and the boss suit beckoned. I gave in to the temptation.

Partner raised me to 4S.  How do you play this thing on the lead of a low diamond?  South takes the top two diamonds and leads back a low club.  I played a low spade to the Ace.  Both opponents followed, but the king did not drop.  I cashed the club Ace, ruffed a diamond on the board. then played a club and South's  queen dropped. I then played a spade to South's king, but he was now endplayed -- all he could get was his ace of hearts. So, 4S was down 1.  A lot of work for an average board!

In a pajama game (all tops and bottoms), this hand was one of the bottoms.  It hit a seam in the 2/1 system that we are playing. I held:

What is your call?  What does 2NT in this sequence mean? Would you bid it without spades partially stopped? Is the hand good enough to bid 3D?

Spades were 4-3 and diamonds 3-3.  Partner held the heart Ace, diamond queen and KJ of clubs tight. After they took their four spade tricks, East-West had 9 tricks in  NT.

In other words, this board was lost when we decided to play a forcing 1NT.

Playing a team-match with a pickup partner and very good opponents, we ran into a spades jinx. 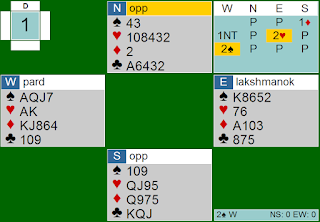 South opened 1D, and partner overcalled 1NT (15-18). I transferred to spades and we played in 2S making four. At the other table, where South didn't open, our opponents had an easy route to 4S. 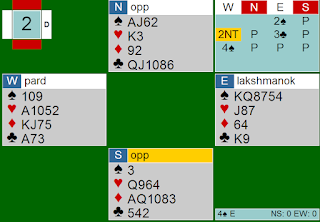 After I opened a weak 2, partner bid 2NT. Undiscussed, I took this to ask about an outside A/K and showed my King of clubs at which point, partner bid 4S.  This went down 1, although I can make after the heart lead if I finesse the Jack of spades.

Third hand of the spade jinx: 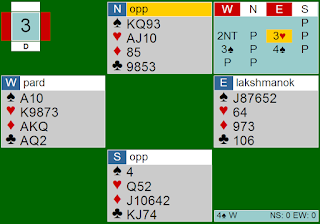 4S went off one. At the other table, they played in 2S.

Fourth hand of the same series: 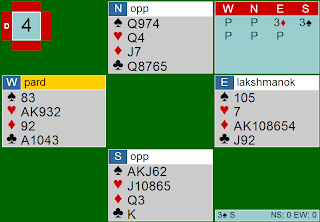 Here, they played in 3S and went off one.  At the other table, our teammates let EW play in 2D, making 5.

Our first imp gains occurred on this hand, the fifth hand of the match when they didn't find the game at the other table: 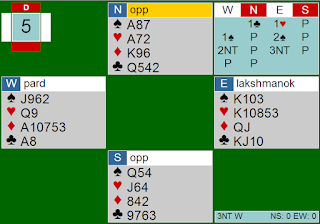 As you can see, it was touch-and-go for a moment. We might have ended up in spades!

With a balanced hand and no texture ...

Playing a team-match with a pickup partner and against good opponents, I was faced with a bidding decision:

So, it's now not a question of what to open, but what to overcall.  What do you do?

2S doubled went down 3.  I think I could have played 1NT doubled for down 1 or perhaps 2.

With all the discussion on various blogs about bids-out-of-tempo, I have started to get more attuned to partner's hesitations.  The fact that this was a non-regular partner did not exactly help me on this deal from the same match.  I held:

If partner had not bid out of tempo, I would have made a negative double here.  The fact that South has not jumped seems to indicate that partner has a fair number of points. I have four hearts and clubs and a tolerance/fitting-honor for diamonds.  But partner had hesitated, showing extra values, and I now felt bound to pass.  1S made, due to several defensive errors, for a half-dozen IMPs.  What do you think? Could I have still made a negative double?