Playing online with a regular partner, I pick up the following hand: 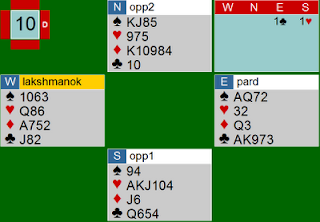 Partner opens 1C and RHO overcalls a heart.  What do you do?

I bid 1NT and it's too late now, because 1NT has promised a stronger hand than what I have. LHO bids 2H and partner competes to 2NT, going down 1.  Although 2NT can make double dummy, it requires placing both king spade and king diamond with north.

I should pass 1H.  2H should be down 1 (club lead, heart back. Then we get two two spades, a heart, a diamond and two clubs). If 1H gets passed to partner, he can bid 1S and I can venture 1NT or 2C at that point.

When a partner makes an unusual bid ...

One of Karen Walker's bridge themes is to advise "Think about partner's potential problems". In other words, what do partner's bids mean? Especially when faced with an unusual bid, pause a moment to think about what could have prompted partner to bid that way. Playing online, we made bad decisions on two deals that illustrate her point.

Partner bids spades, and when you raise to 2S, he bids 3NT. What do you do? 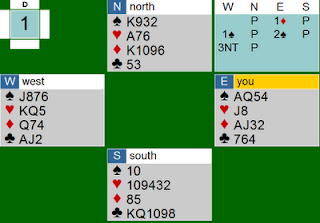 Don't just bid 4S because you have four spades. Your earlier 2S bid already showed that you had four spades. The normal thing for partner to do would be to bid 4S. He didn't, so what is he saying? He's saying that he has a balanced hand and his points are all outside of spades i.e. he feels that 3NT is the place to play unless you have a distributional hand.  Do you have a distributional hand? A 5-4-2-2 hand would be distributional, but a 4-4-3-2 hand is practically balanced. And even in your doubleton suit, you have a Jack. Pass the 3NT.  4S goes down 1.  3NT makes. 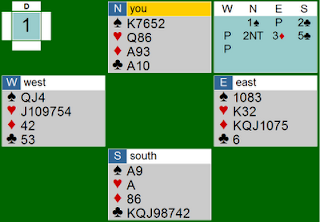 Again, what is partner saying? He is saying that he wants to play clubs. What clubs have you promised him? Probably two, maybe even 1. So, he probably has a self-sufficient 7-card or longer suit. He must have outside entries (since he bid 2C). So why did he make this 5C bid? In this auction, if he bids 3C, you would just bid 3NT with a diamond king (and maybe pass without a diamond stopper). Either he doesn't want to play 3NT or he doesn't want to stop short of game. The bidding problem for partner is that he has clubs and no diamond controls. 4C would be Gerber and he can't do that with doubleton diamonds. If you stop to think about it, your action should be obvious.

Your two aces are golden. One is in partner's suit and the other will win the first trick. Bid 6C.  On this hand, 7C and 6NT easily make.  In clubs, you can establish the spades and throw your diamond loser on the good spade. Dummy's clubs give you two entries even if they lead a diamond on the get go.  7NT also makes because East gets squeezed between hearts and diamonds, but I don't know if I will be alert enough to follow East's diamond discards. to know that my 8 is good.

Playing online with a regular partner in a matchpoints tourney, we defend 4H (click on "Next" to follow along):


Partner led a heart and declarer took two rounds of hearts, a diamond and two more hearts. I discard a club (easy) on the third heart. On the fourth heart, what do you discard?

Diamond or spade?  Dummy has four cards in both.  I threw away a diamond and it was Too Late Now.  Dummy's fourth diamond was good and he could discard a loser on it.   4H+1 was a top board for them. Most of the field was in 4H making.

From the bidding (he didn't sit for 3NT),  partner has the Ace of spades. Declarer probably has 3 cards in each minor since with four, he would have bid 6-4-6.  I need to discard spades and protect the diamond Jack.

The end play that wasn't

Playing in an individual tournament online, I accepted my robot partner's game invitation and found myself in 4H.  Follow along with the deal by clicking on the "Next" button.


They take the first two tricks, the second one with a ruff. Then, East leads a diamond to my Ace under which West drops the King. I play the Ace of hearts and East's king drops. They have misdefended -- East ruffed the club with a natural trump trick. Can I capitalize on their mistake and make the hand now?

I pulled the remaining trump, ending up in my hand and took the spade finesse but it was Too Late Now. I still had a diamond loser.

I can maximize my chances better. If East started with KQ doubleton diamonds, I can play the 8 diamond and duck in dummy.  My losing spade goes away on the Jack diamond. And if this doesn't work, I still have the spade finesse available.  The point was that with the spade finesse, I still had a diamond loser. So, it doesn't cost to try for this extra chance (made likely by the drop of King diamond under Ace).

What's this blog about?

Two of my favorite columns in the ACBL Bridge Bulletin are Larry Cohen's "The Real Deal" and Mark Horton's "Misplay this hand with me". I like them because they are not fake constructions, but instead show the thought process of an expert player as they play real hands.

I'm an intermediate bridge player (about 90 MPs), so my mistakes are a lot more basic than theirs. As soon as my card hits the table or I click a button, I know that I made a mistake. I call these "It's too Late Now" moments -- I should have thought before I played or bid.

This blog is an effort to learn from my mistakes, to get into the habit of analyzing before playing. I hope that it will be useful to beginners and intermediate bridge players.
Posted by Lak at Tuesday, September 20, 2011 1 comment: