At matchpoints in a strong club game, I was West and playing in 3NT after an auction that went 1NT-3NT.  North led the 3 of spades (3rd and 5th leads at NT): 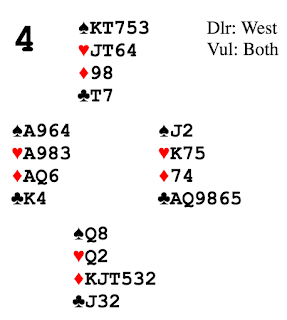 Questions (at the table, I got this wrong):


Who has the 5-card spade suit? Assuming that North had a choice of major leads if he had 3 cards in each, it is more likely that he has the 5-card suit, and that the 3 is his 5th highest card.

Given that North has the 5-card suit, he would have led the King from KQ10 (internal sequence). So, South has one of these three honors.

Interestingly, it doesn't matter because you are going to duck this trick and win the spade continuation. Otherwise, you have no safe way of rectifying the count.

Having thus rectified the count, can you win all the remaining tricks on a squeeze? I'll leave it as a puzzle for you -- you can try to play out the hand on BBO.  Post your answer as a comment.
Posted by Lak at Friday, April 15, 2016 1 comment:

One of the nicest events in the Seattle bridge scene is the Yarington Round Robin.  It takes place over several months at peoples' houses.  Essentially, eight people get together in someone's home, and play 28 boards of bridge.  This year, there are 7 teams, so six matches to be played over six months.

It's heaps of fun, because we are essentially hanging out, eating dinner, drinking wine, and playing cards.  There are no masterpoints at stake, and winning any of the matches is unlikely -- we are the weakest team in the A-bracket, a bracket where a couple of teams have made it deep into the Reisinger and other national events.

Yesterday was my team's first match, and we lost 30 imps due to sloppiness on my part. 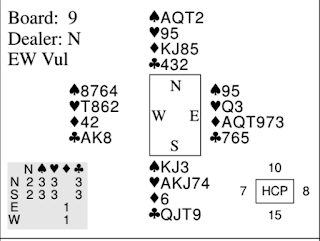 This is when I got sloppy.  I cashed a top club to let partner know to lead me back a spade and then lead a diamond. Partner won with the 10, cashed the Ace of diamonds and had no club to lead back to me!  I of course had the complete count of the hand -- partner must have 2 spades since they are playing 3NT and not 4S, and so he must have 3 clubs. He discarded two of those -- he had to be careful to not give away the position of the King of spades in case I had it.  So, cashing that club honor was poor form. Once I'd decided to cash it, not cashing the second club also was beyond the pale.

The second hand was a case of bad judgement.  I was West on this hand: 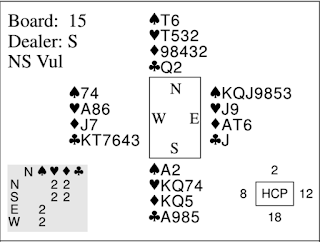 South opened 1C, I passed and North replied 1D (no, they are not playing Precision; North was simply being frisky). Partner bid 1S.  South doubled, North replied 2D over which partner bid 2S and South bid 3NT.  Sitting West, what do you lead?

I believed South, and believed that he had two stoppers in spades. I also believed that North had his 1D bid. So, with 7 points in my hand, partners spades didn't rate to be that solid (given the vulnerability, he'd have 7 or so points and 6 spades), I thought -- I put declarer with something like KJ9 of spades and partner with perhaps the J8 of clubs to go with his AQ of spades.  So, I led a club, and continued clubs when declarer immediately played the King of hearts.  Declarer then proceeded to drop my Jack of diamonds, and partner's solid spade suit vanished into thin air.

The third sloppy hand was a much simpler mistake.  When partner asked for keycards in hearts, I was West and replied 5D, showing zero.  The King of hearts is a keycard, and I had it.  We missed the slam, for another 10 imp loss: 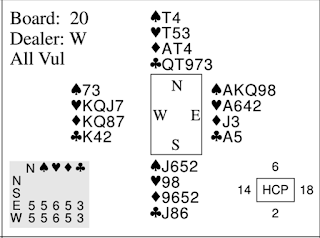 Sloppiness on game-and-slam hands at IMPs is very costly.  In spite of these disasters, we somehow managed to hold on to win the match 79-76.  We'll take it!
Posted by Lak at Friday, April 08, 2016 No comments: