My first week in Seattle, I went to a bridge club that promised partners and ended up playing with someone who showed up without a partner.  The pickup partner was a very pleasant person, but not a great player. The game itself was also very uneven with lots of poor players. Norman Bridge Club, the club that could, has spoiled me, so I decided to look for another club.

Mercercrest was recommended on BridgeWinners and sure enough, when I asked whether I could play, I got a better response.  One of the rotating directors offered to play with me to see who I would best match with later.

Partner leads the Ace of spades. Dummy comes down with ♠QT8 ♥QT ♦KT932 ♣T62.  Seeing the queen in dummy, partner switches to the 3 of clubs.  Under your Queen of clubs, declarer drops the Jack.  What do you play next?

The Jack, I decided, could be a false card since declarer was protected by the 10 of clubs in dummy, so I attempted to cash one more club.  Disaster, as declarer proceeded to discard his spade on his good hearts.  The hand was:


Needless to say, trying to cash the Ace of clubs was a boneheaded move.  I simply needed to lead a spade to allow partner to cash her spade.  My Queen of clubs was clear, and so partner knows to lead back a club. Declarer's hearts are not going away if partner has a winner in that suit, but if declarer's hearts are solid, dummy's spades will vanish.

A few more such boards and I was thinking that things were not going well.  The partner I was going to be matched up with next time was probably going to be as poor a player I was being this evening. Towards the second half of the evening, though, I finally found my footing. This was the last board of the evening.

I was declarer on this deal:

I had the North hand.  What would you open?

Most of the field took the losing heart finesse or mismanaged entries and made only four on the layout.

I decided that the key was to discard diamonds on dummy's hearts.  And if hearts are 4-2, you need two dummy entries. So carefully save the 3 of clubs.  Take the first trick with the 9 of clubs and play two rounds of hearts ending up in dummy. Ruff a heart with the Ace of clubs, and be happy that the hearts do not break 3-3. Play a club (not the 3) to the Queen and ruff the fourth heart high. Finally, play the 3 of clubs to the 4, and discard a diamond on the fifth heart.  Finally, lead a spade to the king.  It loses, but you have your 11 tricks for a top.  The nice, flashy declarer play won't hurt your case.
Posted by Lak at Saturday, September 13, 2014 No comments:

Flyer for a newcomer bridge game

I was standing in line for food at the Oklahoma City Sectional when the person ahead of me in line turned around and said in a disappointed voice: "I was hoping you would make me a flyer for my newcomer game, but then I heard you are moving to Seattle.  I really liked the Easybridge flyer you made and wanted to have some cute cartoons on my flyer too." 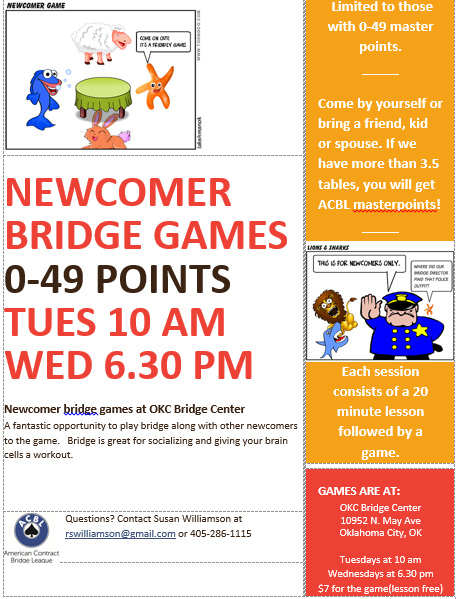 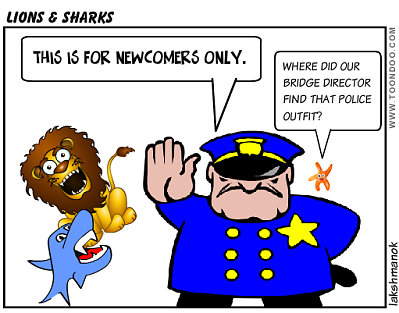 Here's the Word document in case you want to use it as a starting point.