We played just team events in a local sectional.  Before the event, I asked my teammates:


Everyone voted emphatically to play in the open knockout.  The Seattle board has decided to play the open KO with no brackets, so we were playing very strong teams.   You know the old poker saying about looking around you, and if you don't know who the sucker is, it's you?  In this field, we could look at every team, and realize that we were the suckers.

The first round was a three-way with two of the strongest teams even in the extremely strong field; we ended up winning both those matches (one of them on a blitz, the other by a couple of imps) and that's when I thought we might have a chance.  At the end of two-days, this was the scoreboard: 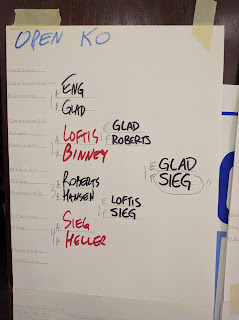 We were team Sieg.  We were lucky of course, winning the semi-final match by just two imps and benefiting from the opponents in all our matches guessing wrong more often than not on high-level contracts.

Each of the pairs in the teams we beat in the knockout would normally own us in club games. But knockouts is different, and bidding our hands to the maximum (but below game) and keeping them guessing worked out well.  We also went about manufacturing swings from board 1 so that we (the weaker team) could prevail.  This won't always work, but it's the only chance.

After winning the two-day knockout event, partner and I returned for an open board-a-match (BAM) event and promptly proceeded to gift away the first dozen boards.

Scoring matters, and it is best to take a deep breath before an event and think about how aggressively to compete and when to double to protect one's plus score.  The tactics that work in a 24-board knockout or 12-table club game do not work well at BAM.  We knew this, of course, but this was our first BAM, and we were playing as if it were matchpoints.

BAM, however, is different from matchpoints in one crucial way. A slightly-below par option will have plenty of company at matchpoints and end up with a 40% board, but it is disaster in a strong BAM field.  Time and again, we found ourselves too high and doubled on distributional part-score hands.  It took us some time to figure out the change in strategy -- of careful precise bidding, risky declarer play, and passive defense.  Our afternoon session showed improvement (55%) but the poor (46%) morning score could not be made up and we didn't scratch.